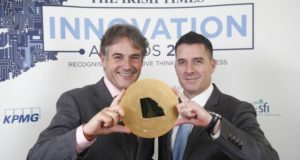 Earlier this year the European Space Agency described an invention by Irish company Arralis as “the centrepiece of a powerful 94GHz radar system, offering nearly 10 times sharper resolution than the landing radar used by theApollo missions to the moon”. High praise indeed.

The Arralis 94GHz radar chipset will aid unmanned landing by spacecraft, the detection and avoidance of space debris during the spaceflights. But that is just the beginning for this remarkable new radar and communications technology. Potential applications range from air defence systems, drone guidance systems, airport radar and driverless cars, as well as internet and next generation 5G telecommunications systems.

Arralis chief executive Barry Lunn explains that the 94GHz frequency band is the key to the capabilities of the new chipset. “Essentially, when you get up into higher frequencies you get higher resolutions. Also, as you increase frequency the wavelength gets smaller – and millimetre waves have very powerful and useful characteristics.”

Wifi routers operate at the 5.4GHz frequency at present but when you get to frequencies above 30GHz the wavelengths come down to millimetres. “As the wavelength gets shorter, the antenna gets smaller and the device gets much smaller as well,” Lunn adds.

The potential power of the technology is clear, and what Arralis is doing is bringing it much closer to being realised. Lunn points out that while the Arralis 94GHz radar chipset is particularly well suited to space travel uses it is also has some very useful terrestrial applications.

“94GHz isn’t anything new,” he says. “The two most sophisticated missiles in the world – the US Hellfire and the UK Brimstone – use it in their guidance systems. What’s new in what we are doing is bringing it to a commercially scalable chipset. The 94GHz technology in the front end of a missile costs $40,000 (€35,800). We are bringing this down to around $500 – we are bringing the costs down from defence scale to commercial scale.”

This brings it in range for use in commercial helicopters and drones and, ultimately, into autonomous or self-driving cars. “Radar for autonomous cars is not quite there yet,” Lunn says. “In heavy rain a Google car will just pull over because of the limitations of its radar. Cars equipped with 94GHz radar will be able to drive through raid or fog or snow without difficulty. People are always looking for better radar and that is what we are offering.”

It may be quite some time before autonomous cars become a feature of Irish roads but there are some more immediate practical applications for the Arralis technology. These include bird detection systems around airports – crucial safety systems that help to ensure jet aircraft don’t suck flocks of birds into their engines with potentially disastrous consequences.

“The US Air Force has built a bird detection system that is 2 metres high and 1 metre wide and is towed around in a horsebox,” Lunn notes. “We have an equivalent system that sits in the palm of your hand . . . the computer that used to take up an entire room is now contained in a mobile phone. The same is happening with our technology.”

The Arralis team started work on the technology in 2014. One of the key drivers was the emergence of 5G telecommunications and its requirement for millimetre wave technology. The development of the radar chipset was motivated by a desire to get into the aerospace market and the company’s success in winning contracts from the European Space Agency has led to discussions with four of the world’s top 10 aerospace companies.

The company has already won a number of significant contracts in the UK, South Korea, China and Russia for its radar technology and has secured support under the EU’s Horizon 2020 science and technology research programme. For the future the company will focus on the continued development of the technology while expanding the range of applications for it.

This means more and more integration of functionality with the chipset. The problem the company set out to address was a lack of affordable integrated products in the space. “The problem we foresaw has become a reality,” says Lunn. “That’s the challenge for us now. For us now it’s about integration and scaling the technology. We are driving prices down by scaling production and getting to price points that our target markets can bear. This is bringing us into the whole internet of things space. Each price point opens up a new market for us.”